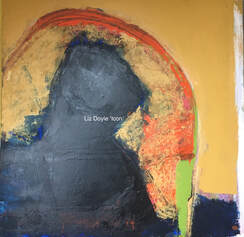 Icon - oil and cold wax on canvas, 120cm x120cm
Liz Doyle has been painting for 20 years since attending a foundation course in art at Aberystwyth University in Wales in 1998.
Her work has become increasingly abstract during the last decade while she has been living in County Donegal. Although inspired by the colours and rugged beauty of her surroundings, her main leaning is towards Abstract Expressionism. Her medium is oil and cold wax, which she uses on birch panels or on prestretched box canvas or on  unstretched linen canvas stapled directly to her wooden studio walls.
Her work has been influenced by the Bay artists of the west coast of America (specifically Richard Diebenkorn) and the New York school of painting (eg Robert Motherwell, Helen Frankenthaler and Joan Mitchell) after her visits to many galleries in San Francisco and New York in the last few years.
Since her solo show last year in Bridgehampton, Long Island, New York, she has been exclusively represented in the USA by Mark Borghi Fine Art (www.borghi.org).
This year she has a solo show here in Ireland at GreenFuse gallery in Westport, County Mayoand also has another solo show booked in County Donegal next year.
A prolific painter and popular with her large social media following, much of her work can be seen on her Instagram account @lizdoyleartist
Or you can email her directly on liz-doyle@live.com Her website is www.donegallizdoyle.com
​